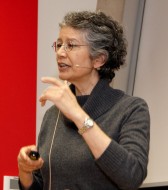 Genomic imprinting – an entry point for the unexpected:

All mammals including human beings inherit equal numbers of genes from both their parents, but about 200 of these are ‘imprinted’ by one parent. The consequences of this is that although we have two parental copies of imprinted genes only one copy can be turned on, while the other is locked in a silent state. The study of imprinted genes has uncovered many unpredictable findings about what controls the on/off state of a gene. In particular, the Barlow lab has shown that a special class of inefficiently-spliced long non-coding RNA, known as a ‘macro’ ncRNA, act in cis to initiate silencing of imprinted genes. The human genome is known to contain vast numbers of long ncRNAs that are presumed to play a gene-regulatory role. The Barlow lab is now using RNA-seq combined with a recently developed pipeline to optimize the identification of the whole coding and non-coding transcriptome in mammalian cells, to study the role of long and macro ncRNAs in development and disease.